Wolf Song
I’ve spent many nights at peace with myself
Alone with the wolves, I play my flute for them
They compose the song.
It is at these times when I remember who and what is important to me
When thoughts come most clear and memories are made.
Written by: Brenda Foster

Runs with Wolves Sanctuary, a non-profit wolf rescue and education center, is located in Limington, Maine. Here you will find wolves and wolf dogs, commonly known as hybrids, that have been abused, neglected, or abandoned.

Now, in the comfort of love and compassion, these beautiful creatures can live in peace for the rest of their natural days. 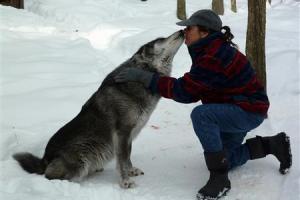 Growing up as a child, Brenda worked with her father who did wildlife rehab with small animals such as fox and raccoons. She started volunteering for a large wolf and hybrid rescue center. The owner noticed Brenda’s compassion and love for those that had behavioral problems and gave her the responsibility to work one-on-one with them.

When working at the rescue center, she began to think about opening her own sanctuary and asked if she could bring home Caine, a “special needs” wolf, so she could work better one-on-one with her. Within 6 months, Brenda had not only rescued and adopted Caine, she adopted another wolf named Bandit. Since wolves are pack animals, she thought it was important that Caine had a companion. Brenda has a special gift with wolves, and she finally opened her sanctuary.

At first, it was located in Porter, Maine. Nine years later, she inherited her folks’ place in Limington, and since it had the acreage, she moved the sanctuary there. In 1990, she named the sanctuary Runs with Wolves, honoring the native name she’d been given in ceremony when she was 9 years old. In 2004, the sanctuary became a non-profit.

Wolves, like most wild animals, do not adapt well to captivity. They are usually surrendered to rescue facilities if they are lucky, or, sadly, more often euthanized. We do NOT allow our rescued animals to breed, as we are morally opposed to producing more captive wolves and hybrids.